MoSKito Config is build of different configuration objects, which makes it easier to change and maintain. Each object can be configured separately.

Below is a typical configuration, different sections of it will be discussed separately.

MoSKito is configured based on @ConfigureMe Annotations:

ConfigureMe expects the Configuration file to be named moskito.json and looks for it in the classpath. However, it is possible to give this file a different name (or use xml or properties instead of json).

The AlertHistory config defines how many items are stored in the in-memory alert history, and can be displayed in MoSKito-WebUI:

Each notification provider is configured with the following attributes:

The thresholds config contains a list of threshold objects. This is another way to define thresholds.

or, in Java words:

Each Threshold contains the following info:

The accumulationAmount controls the amount of values an accumulator can store. The real amount can be 10% higher, because 10% overload is allowed to reduce number of list operations.

AutoAccumulators allow to automatically create accumulator whenever a new producer has been registered which name matches specified pattern:

An autoaccumulator section contains the same values as accumulators:

Gauges are a visualization tool for representation of current state of a producer in relation to it's expected min and max states.

Gauges can be used in Dashboards.

Gauges are configured in their own section in the configuration file.

Each gauge is configured in following way

A GAUGEVALUE can be a constant or a reference to a producer. In the following example a static gauge is configured.

One might argue, that a static gauge doesn't make much sense, but it demonstrates the principle and you can use it to present a value which is produced outside of the system.

A GAUGEVALUE can be tight to a producer/stat/value tuple as in following example:

Remember you can use either constant keyword or producerName, statName and valueName. If a gauge value config contains constant everything else will be ignored for this value.

Besides the values the zones of each gauge can be configured. If you don't provide gauge specific configuration, defaultZones are applied. If you provide no defaultZones either, the pre-configured default zones are used, which are hardwired in GaugeAPIImpl.

You can configure default zones which would be applied to all your gauges, if the gauges don't have explicit zone configuration.

Below example configuration of gauges part.

Tracers allow you to monitor who is executing a place of code, in code. Tracers are typically switched on/off from inspect on Runtime with the Tracer button in SingleProducerView in MoSKito Inspect:

However, there are some configuration options for Tracers too.

Tracers are configured via the element tracingConfig in MoSKito Configuration.

All tracing configuration options are changeable at Runtime. The options mean in particular:

Dashboard allows you to take a look at your system health in general. It's fully customizable and can be changed using appropriate section in configuration file or via MoSKito-Inspect UI. You can create any number of dashboards desired. Dashboards are useful when you don't want to lose sight of key parts of your system.

Each dashboard consists of widgets. Widgets can be of 4 types: 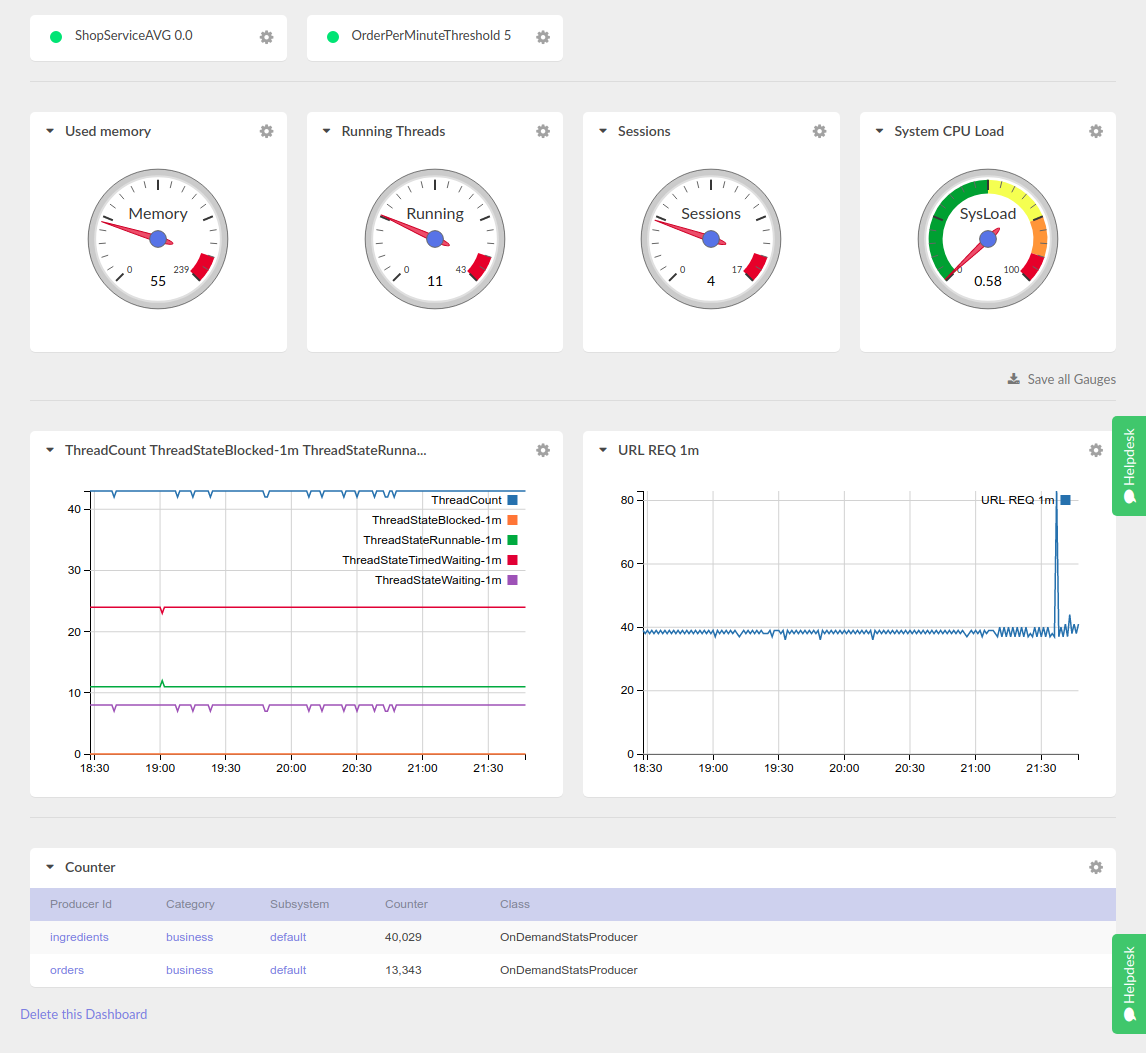 Each chart has the following properties:

Each chart pattern has the following properties:

Producers can be added to dashboard by editing appropriate "@producers" section. Just list producer names (exact match is required). Producers will be grouped by decorators.

This sections allows you to configure producers automatically by regular expressions. All producers which names (ids) matches the pattern will be added to the dashboard. Producers will be grouped by decorators.

If there is no widget section specified in dashboard config section, default configuration is used, which is

For each plugin, the following values are configured:

Builtin Producers section allows to configure which builtin producers should be enabled by default. If you don't set anything, all producers are enabled (default value = true).

Journey are configured in their own section in the configuration file.

Each journey is configured in following way

Errorhandling config defines how MoSKito stores and helps you to handle errors that occur in your application.

Here is a configuration example:

You can configure one or multiple catchers for specific exceptions you want to investigate.

Catchers will are accessible from the Navigation point: Everything else | Errors and look like this:

Every catcher will container up to catchersMemoryErrorLimit errors:

And you can click on every error to see the stack trace: 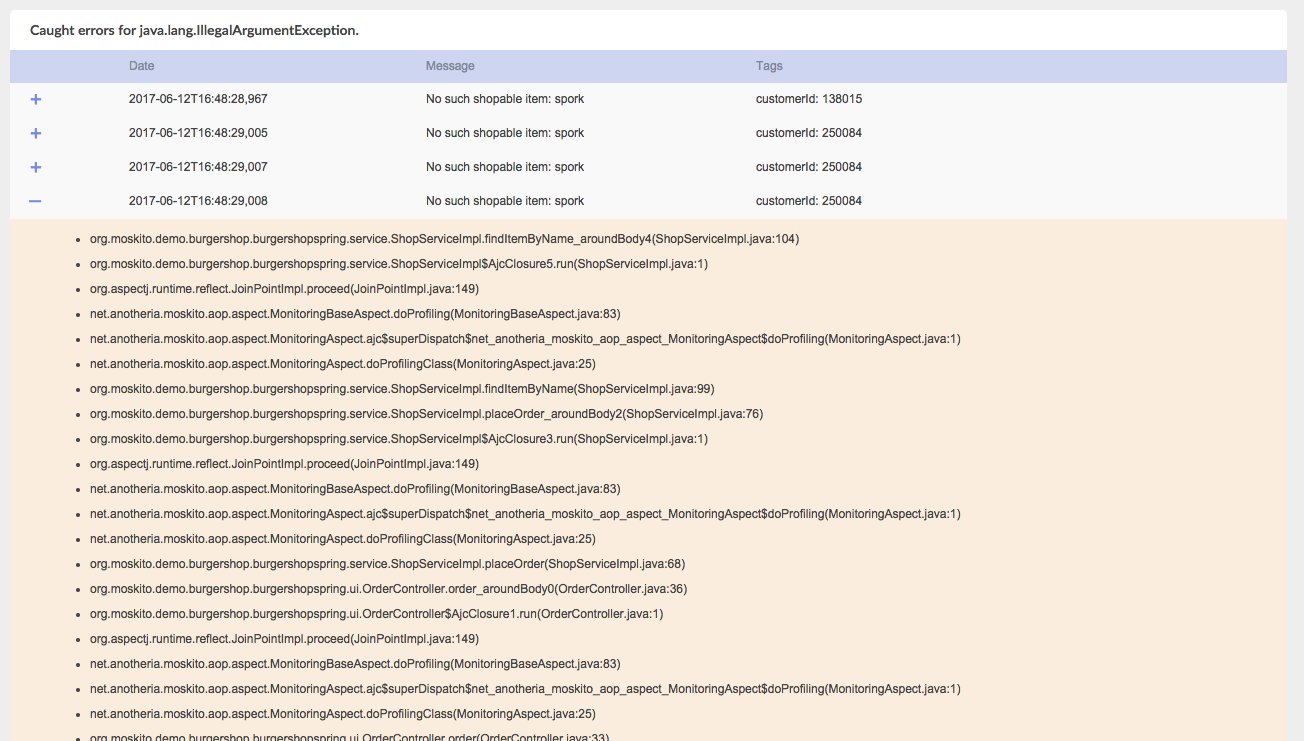 In case autocharting is enabled two charts will be created for each error, a total and initial value. Initial means errors which were the first in the execution thread, total - all errors, including followup errors.

this allows you to analyse error occurrence visually.

Tagging allows you to add additional information to journeys and caught errors. An example tagging config looks like this:

MoSKito will automatically tag session, ip, referrer, user-agent, url and server name unless you disable them by setting the corresponding property to false in the tagging config. Tagging has been added in MoSKito 2.8.4.

MoSkito can automatically use any header, parameter, request or session attribute value as tag. To configure a custom tag, you have to specify a name and path as json object under @customTags element:

Where name is everything you want and attribute consists of a prefix and attributename. Following prefixes are supported:

For debugging and informational purposes MoSKito keeps a number of elements in the history for every tag. This way you can see what were the last seen value and check if they meet your expectation. Default number of values is 10.