Where to use MoSKito? 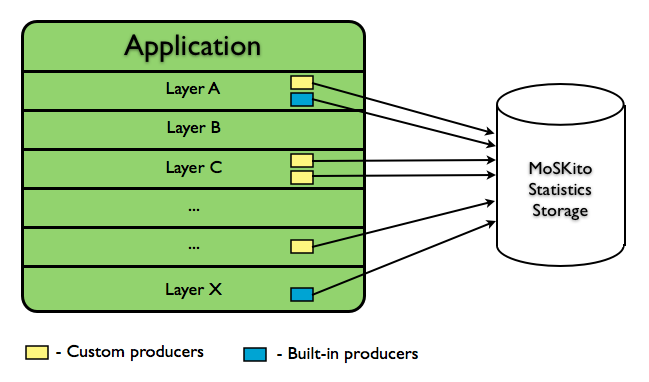 MoSKito can be embedded into any application layer (see Chart above).
The goal of using MoSKito is to have a complete picture of "What's going on inside the application?" at this very moment or any time ago, within any supported interval.

Built-in MoSKito producers are producers that are already implemented and ready to monitor the most essential internal system processes, like memory, threads, etc. They are launched by ProducerRegistryFactory static initializing block.

The distinction of the built-in producers is that they return IStatsProducer.SUBSYSTEM_BUILTIN as the SubSystem value (IStatsProducer.getSubsystem()).

There are some predefined (ready to use) producers already implemented:

use custom, or one of the predefined, net.java.dev.moskito.core.producers.IStats interface implementation to count stats.

See an example of the custom stats producer for some custom queue below:

MoSKito comes with embedded support for major Logging frameworks, in particular log4j, java.util.logging and, for lazy people, System.outs. In order to attach a logger to a StatsProducer you have to perform following steps:

Moskito comes with two loggers: the IntervalStatsLogger and the DefaultStatsLogger (Interval for default logger is 60 sec). The IntervalStatsLogger can be attached to an Interval, the DefaultStatsLogger attaches himself to the unresetable StatsProducer. Both are connecting themself to the internal IntervalUpdateService and listens to the interval updates. As soon as the IntervalUpdate is fired they read the current state of the Producer they are attached to and send it to the LogOutput. Here's an example of how to configure and attach a log4j logger to any producer:

Attaching a log4j logger to a moskito producer is only half of the work, you still need to tell log4j where to log it, here is an example which creates local files for each interval and logs into them:

NOTE: The LogLevel should be INFO.

To have built-in producers stats logged, the next code should be executed once, while initializing (Plus there should be MoskitoBIXXAppendler appendlers and MoskitoBiXX loggers configured in the log4j.xml):