... MoSKito producers: their definition and working principle, the way they are displayed in WebUI and their configurations.

Producer is a piece of code that gets connected to a source of statistics (this may be a class, method, service, servlet or anything that generates statistic data) and makes a count every time the source gets active.

To learn more, read MoSKito-Essential Overview and How to Use MoSKito Producers sections.

All available MoSKito producers are gathered within the Producers tab. To see them, click the tab. 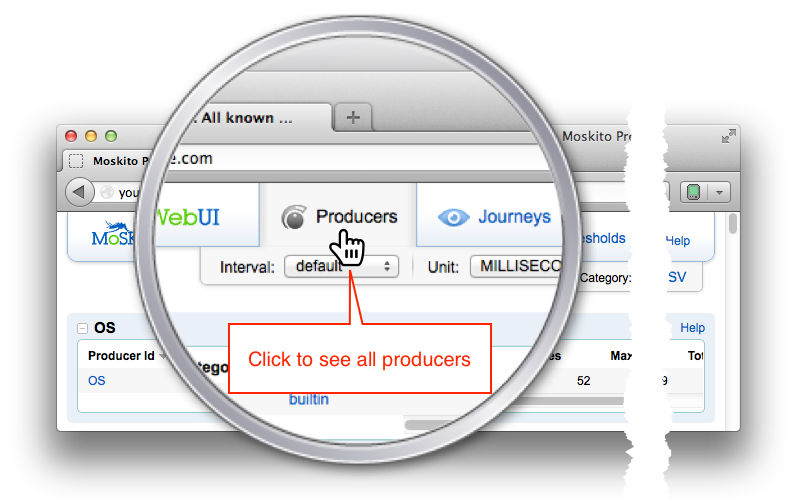 For settings and filtering, use the toolbar (located just beneath the tabs).

MoSKito is interval-based, it captures performance data by the end of predefined monitoring intervals.

This means you may display producers' data for any of these intervals, and thus know performance for the last:

Also, you have 2 other intervals:

Make a selection in Interval menu on the toolbar.

This will show data, taken at the end of the this last interval, like: 5m = data for the last recorded 5min interval. 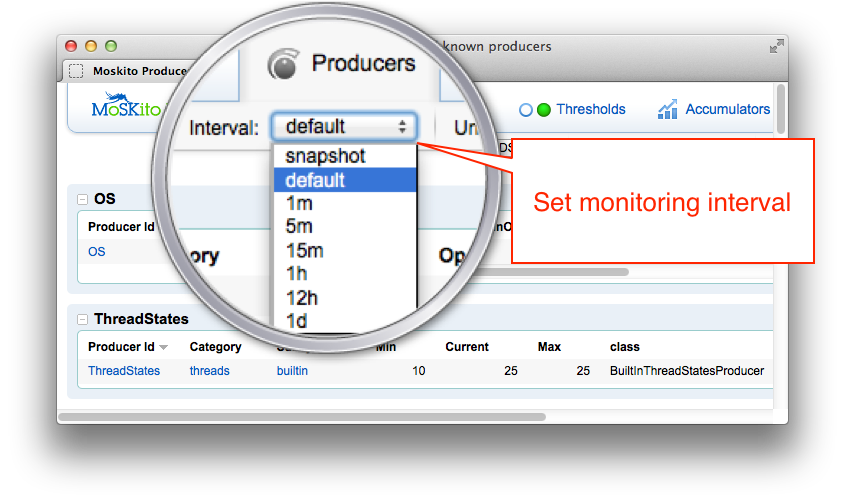 We may display producers' data in:

Switch between time units for display:

Make a selection in Unit menu on the toolbar.

We may have tons of producers. To narrow search, use filtering by category/subsystem or apply custom filtering.

Producers are assigned to Categories and Subsystems when they are being created, that is in the process of MoSKito integration.

Make a selection in Category or Subsystem menu on the toolbar. 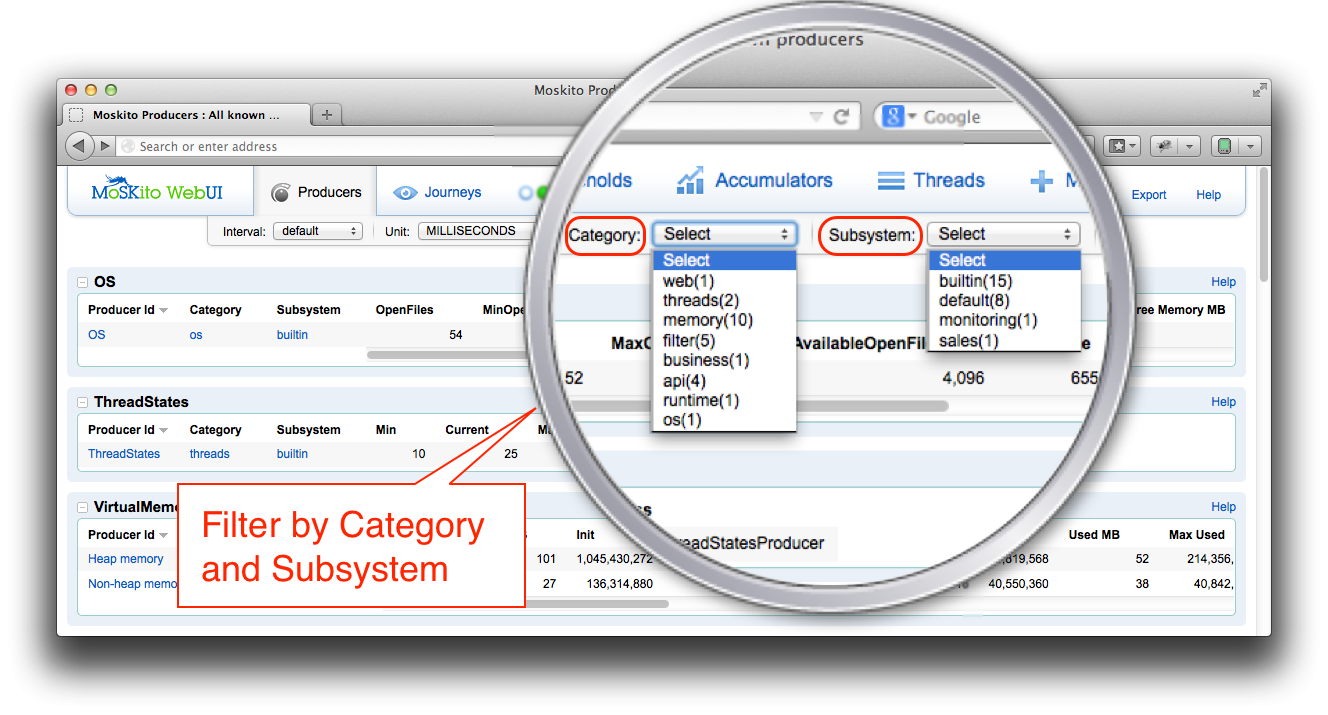 It is always you to create producers in MoSKito. To learn more about adding producers, read MoSKito-Essential Integration Guide.

Still, there are built-in producers that come bundled. They monitor essential system indicators (like memory, threads, http sessions, etc.) and don't require any configuration during integration. To know more, read How to Use MoSKito Producers and Stats and Their Classes sections.

select builtin in Subsystem menu on the toolbar. 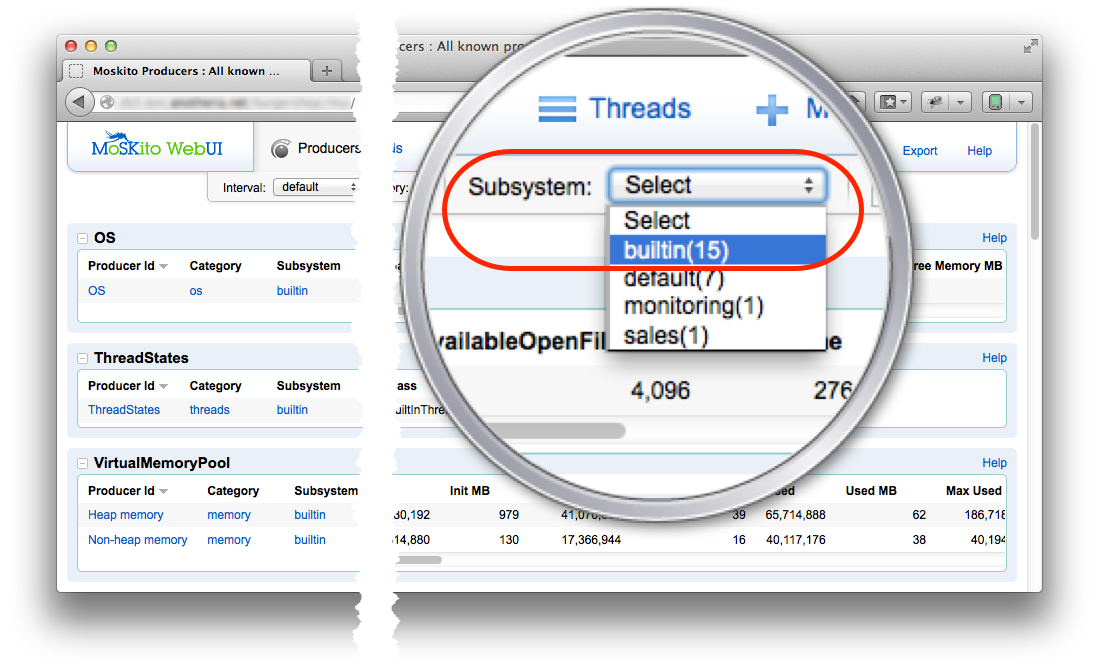 This filter type is useful when you know the name of the producer you're looking for, or at least a part of that name.

Type producer's name (or part of it) in the Filter field on the toolbar and click Filter. 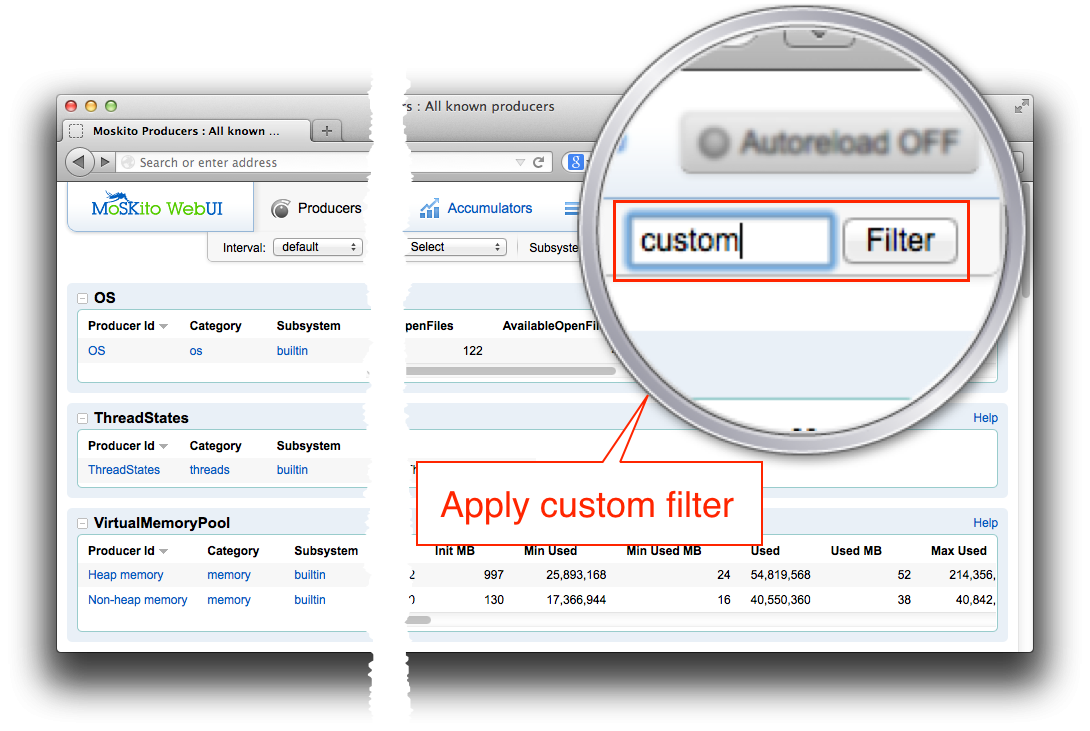 This will display the producers that contain the query in the beginning of their names.

For example:
The valid search queries for DomainFilter producer would be: d, do, dom ... domain.

Before applying new filters, make sure to remove all previous ones!

Decorators are producers' graphical 'wrappers', they present data in a structured way.

click the plus/minus icon in the upper-left corner of a decorator. 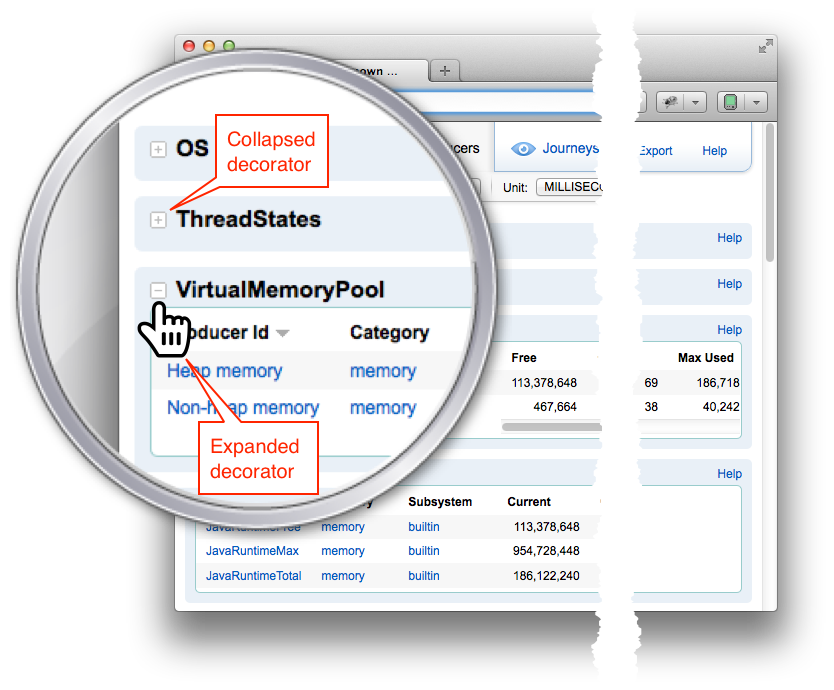 Sort columns within a decorator: 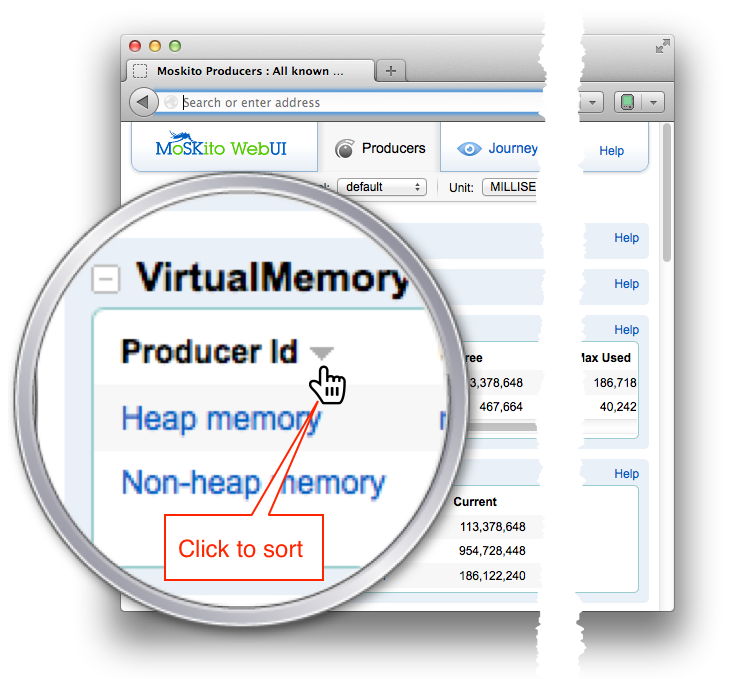 Click the Help link in the upper-right corner of a decorator.

The data, collected by producers within a decorator, may be displayed in a chart.

Charts for multiple producers in a decorator

When a decorator unites multiple producers, we may display them as charts.

Move cursor over the StatValue and click the appearing 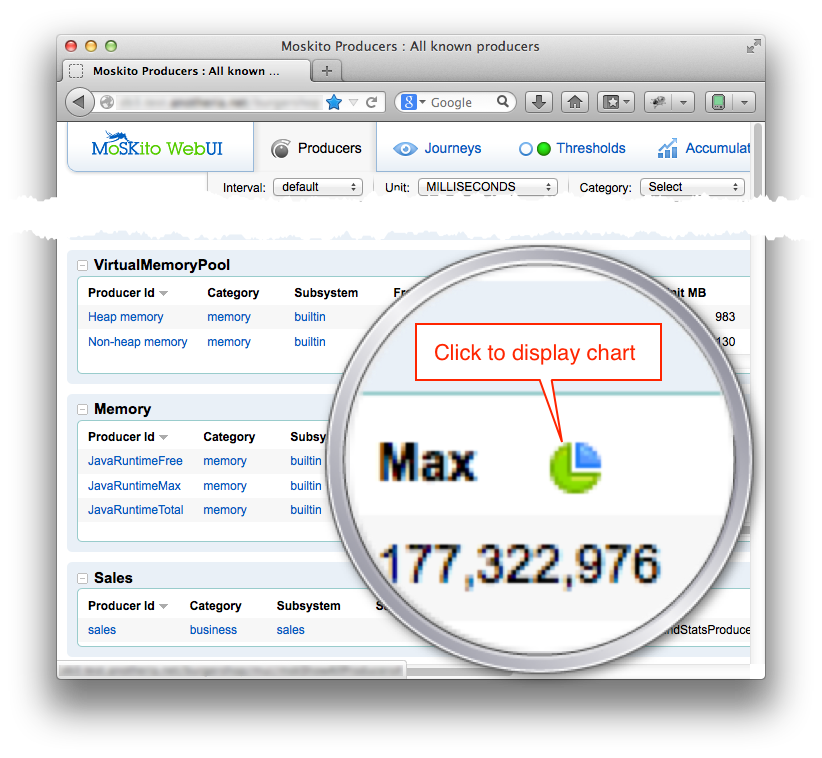 By default, a pie chart will appear.

in the upper-right corner of Chart screen.

in the upper-left corner. 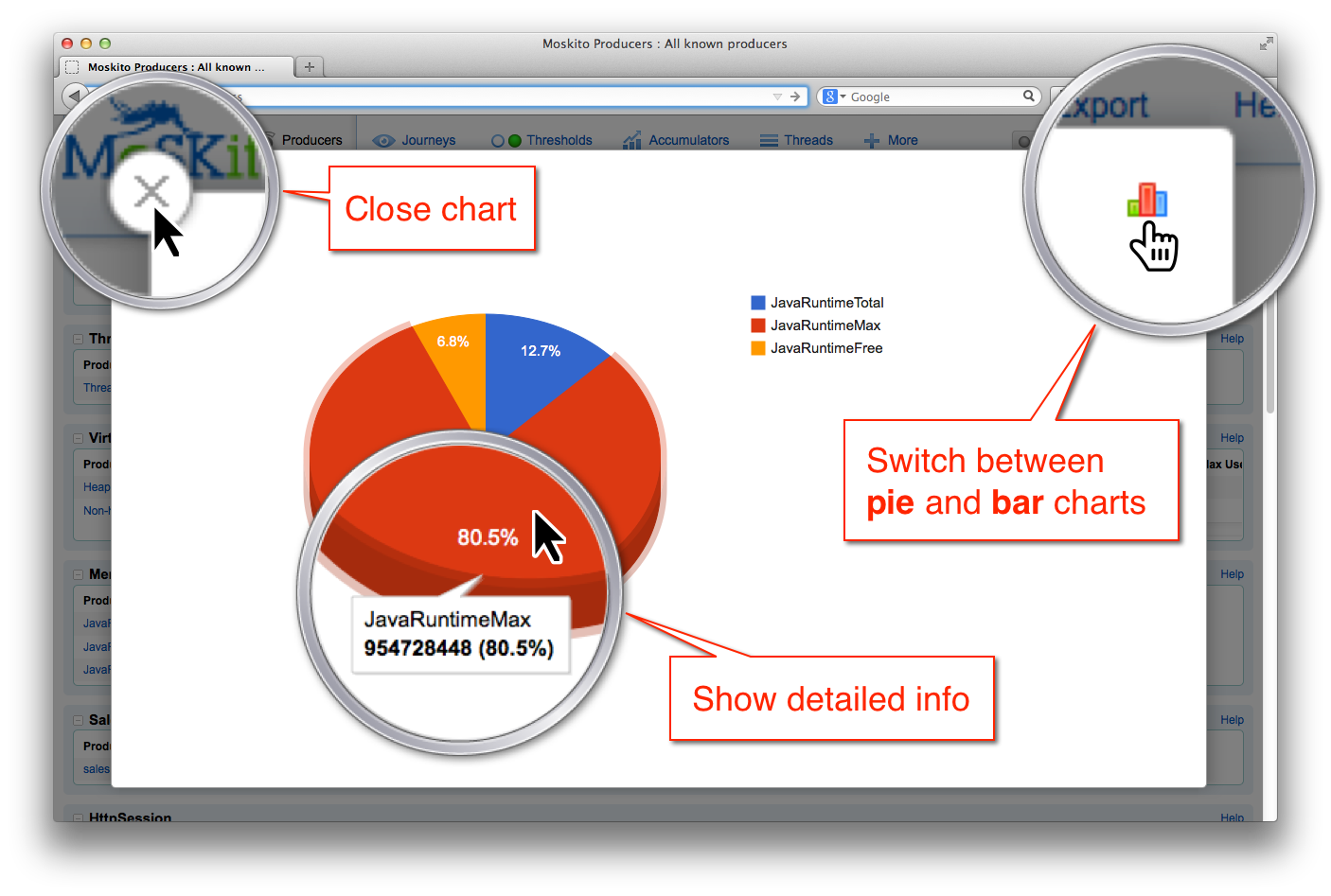 A producer page is a private producer's space.

The Producers tab lists all producers and main data, a producer page shows all available info for this producer:

For example:
The ThreadStates producer has multiple stats, the Producers tab only screens its cumulated stat. The producer page lists all existing stats (blocked, new, runnable, terminated, waiting) and all their values. 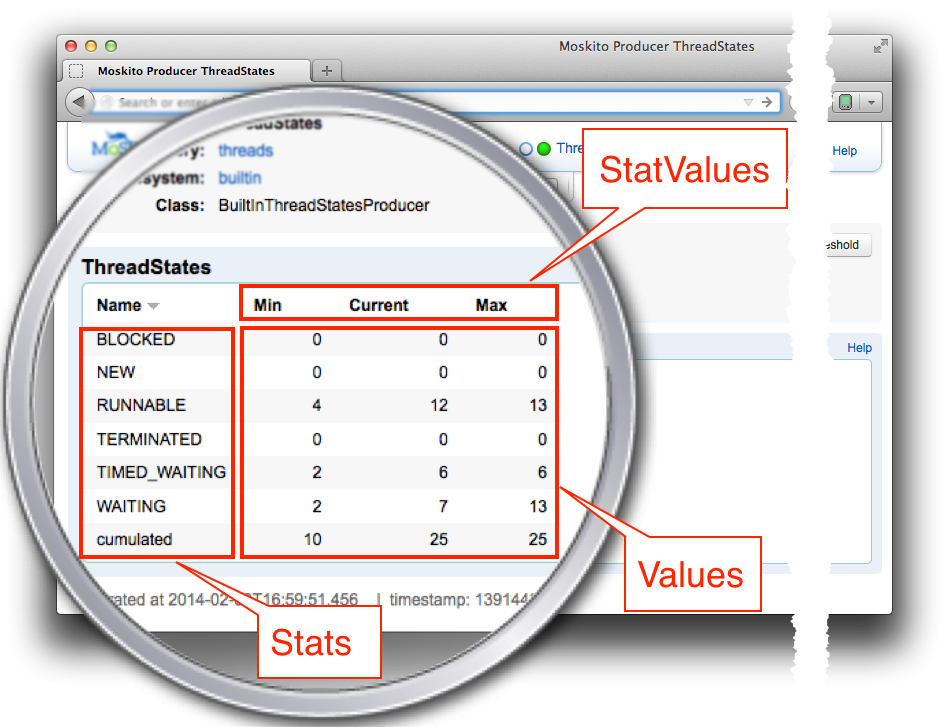 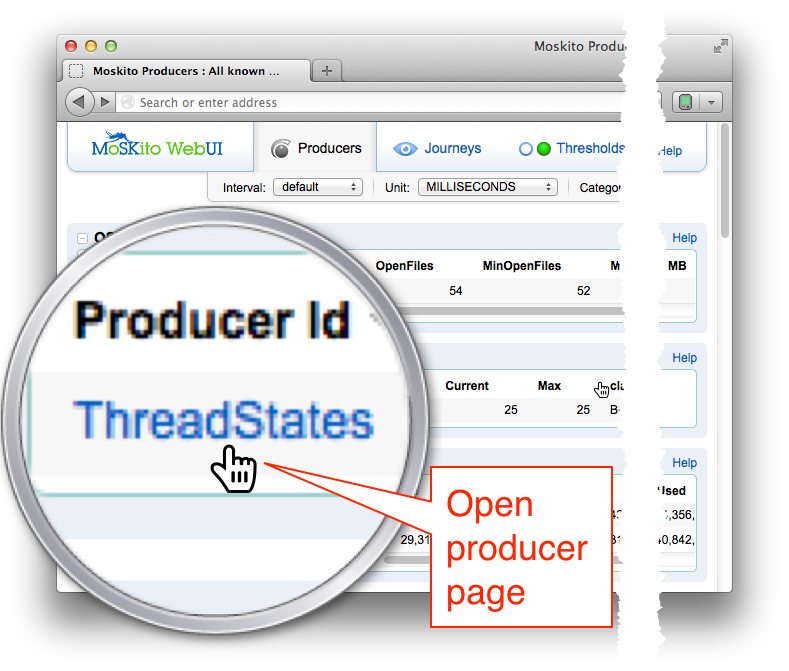 Make a selection in Interval and Unit menus on the small toolbar.

Also, producer page is where you add accumulators and thresholds for this producer (click the Add buttons).

For producers that monitor services, you may use the Inspect functionality.

It shows the place in the application code, where the producer has been added (stack trace). This gives you the precise info about the area, monitored by the producer. 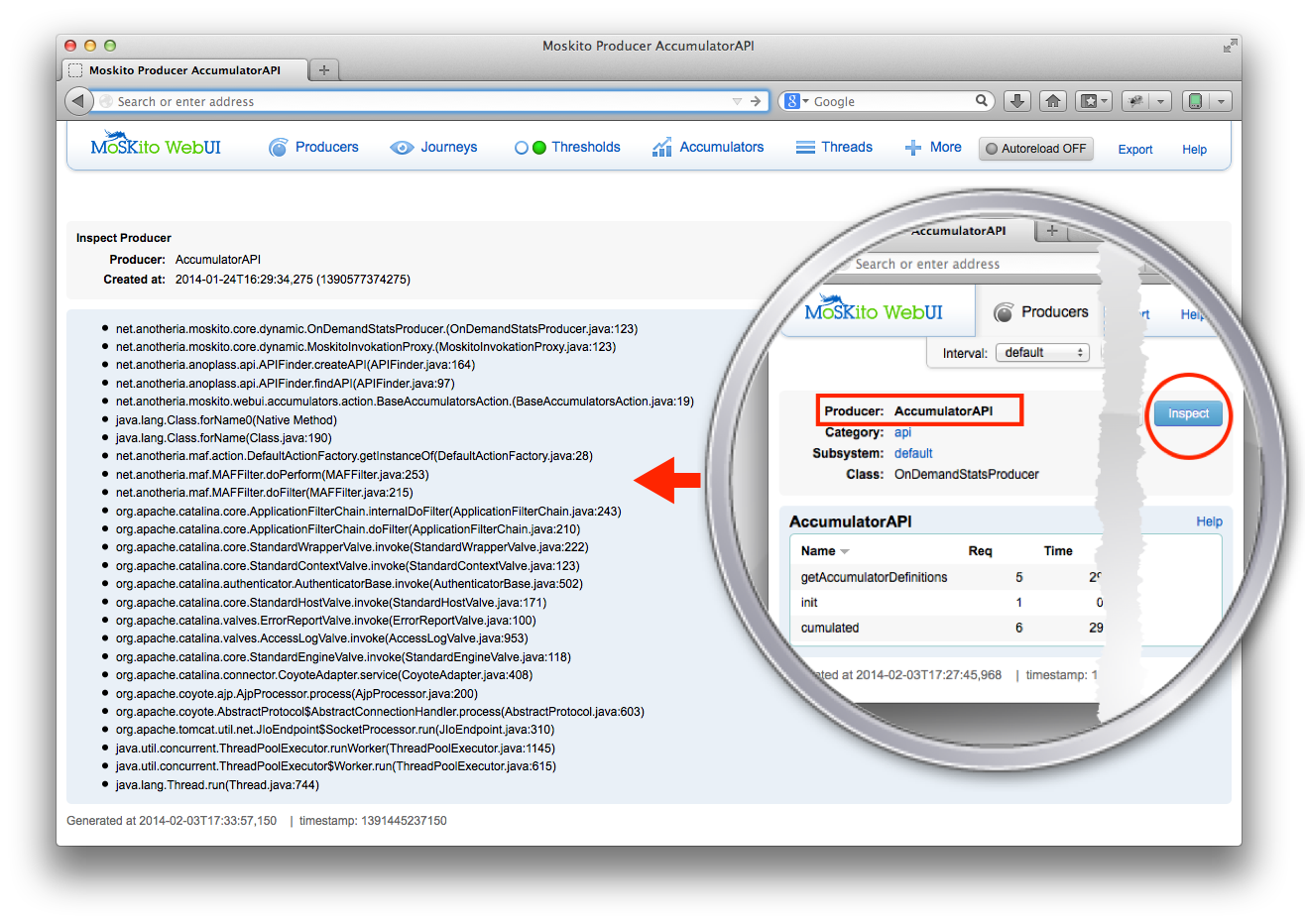